UKEM Records are very pleased to announce that we will be releasing ‘Triptych’ by folk/black metallers Northern Oak!! Originally planned as a digital only release via a Kickstarter campaign, a physical release will now see the light of day for those that prefer physical copies! This release was a ‘fond farewell’ to their fans, being the bands last release before they decided to call it a day sadly. 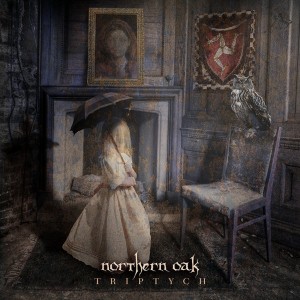 No release date has been set, but the layout is already being worked on and will be released as a glossy digi-pack and will also feature some very special ‘bonus material’ to set it aside from the digital version and make this release that more bit unique. Also featured will be the three original tracks (24 minutes worth of music!!) alongside instrumental versions of each track.
If you haven’t heard these fantastic songs, head over to label soundcloud page and have a listen to the featured track here:
https://soundcloud.com/ukem-records/northern-oak-a-portrait

Release date will be scheduled very soon, so keep an eye out on the label page for more information. Very much looking forward to this release having been a fan of the band for many years now!
Both of their previous releases are available in the webstore now, so if you haven’t got them, support the band and grab a copy! Visit:www.ukemrecords.co.uk/store