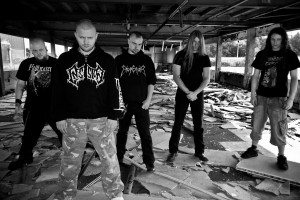 Ukem Records are very pleased to announce that we will be releasing the full length album from north east brutal death metallers (and sadly now split up) Dawn of Chaos. Entitled ‘The Need To Feed’, ex-vocalist Paul explains more about the release…..

“The album ‘The Need to Feed’ began writing in the year of 2010, and after several years of restructuring, demoing, and pre-tracking alongside The Axis of Perditions Brooke Johnson, Dawn of Chaos eventually entered Priory Studios alongside Esoterics Greg Chandler in September 2012. Unfortunately due to my departure the album (other than an online release) never officially got released as a physical copy. Several discussions amongst ex-members occurred with regards to a self release, however unfortunately nothing materialised, until Chris from UKEM contacted me with regards to releasing the album. We came to the conclusion that it was a shame to have a piece of material which nearly 2 years of extreme dedication and craftsmanship never got the release it deserved. It would also be a shame for a band to have such longevity within the UK death metal scene and never have an official album released. Therefore, I would like to express my sincerest gratitude to Chris for giving us this opportunity and allowing the album to serve as thank you for everyone’s support over the years and also as a final swansong to the legacy of the band“.

anyone familiar with the UK extreme metal underground will know that the band were very well respected as well as extremely hard working, so its a great pleasure to be putting this album out. I was sent the promo to UKEM HQ when the album was complete and instantly saw the huge improvement the band had made with this recording, the whole album is utterly punishing and a monstrous slab of brutal death metal. No release date has been set, but we will be revealing artwork and teaser tracks in the coming weeks and months!