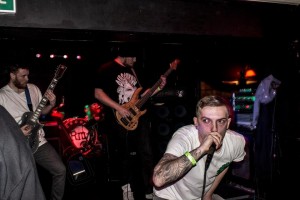 We are very pleased to announce that death/grind monsters Necrogrinder                    have re-joined UKEM Records!! We are set to release their debut full length album some time in 2016 (date tbc). Having released their very successful e.p. ‘The Bunty Man’ we know that their full length album is going to be an absolute monster, full of blasts, slams and guttural extremity. The band are currently putting the finishing touches to a split release with Tintagel. Once complete we’re sure the band wont take long to get into writing mode for the album. If you havent heard the band already, check out the brutal offering that is ‘Compostmortem’                          (taken from ‘The Bunty Man’ e.p.)

More details on the release will follow in due course. Very happy that this is our first fully confirmed release for next year!